Why Influence Matters…or Does It?

The word ‘influencer’ has gained so much traction lately that it’s taken on a life of its own. A lot of young people aspire to become influencers without really understanding what it means to have influence.

It isn’t easy to build influence and it probably isn’t for everybody. However, if you’re in business, you must be an influencer. That doesn’t mean you have to become ‘Instagram famous’ and have thousands of followers that hang onto your every word.

Rather, it’s about having the ability to drive others to take action.

To be an influencer, you need to influence people. It’s pretty simple, right? Yet, so many entrepreneurs and business owners fail to realize just how important influence is.

So, what does it really mean to be an influencer? And, why should you care?

A Lesson on Influencers

Let me tell you a story about influencers. I recently read an article about a young influencer with millions of followers on Instagram and when I say millions, I mean MILLIONS. She came up with the idea to launch a clothing line. Doing so would provide an extra stream of income for her and she figured that her audience would race to buy her t-shirts.

She did what any good influencer would do and promoted her new clothing line across all of her social media channels. She already had great engagement, so she wasn’t worried about getting people to respond. Plus, she had a huge following. So, what was the problem?

As it turned out, nobody wanted to buy what she was selling. She couldn’t reach the minimum order required to even produce the clothing line and had to cancel the entire endeavor.

On the other side of the story, a friend of mine got this fabulous hairdo and I was like, Wow, who did your hair for you? She responded by telling me that she did it herself with her new drying brush. She told me all about it, showed me photos and sent me the link.

Do you think I bought it?

Nope. I bought TWO. One for upstairs and one for downstairs (what can I say, I like things to be within arm’s reach!)

While my friend doesn’t have a huge following on social media, what she does have is my trust. I saw amazing results. I heard her talk positively about the product and I decided to go out and buy it for myself.

Unlike the first girl in the story, my friend was able to move me (and probably my entire circle of friends) to take action. That’s what being an influencer comes down to – having the ability to drive actions.

Read on for three reasons why anyone in business should want to become an influencer. 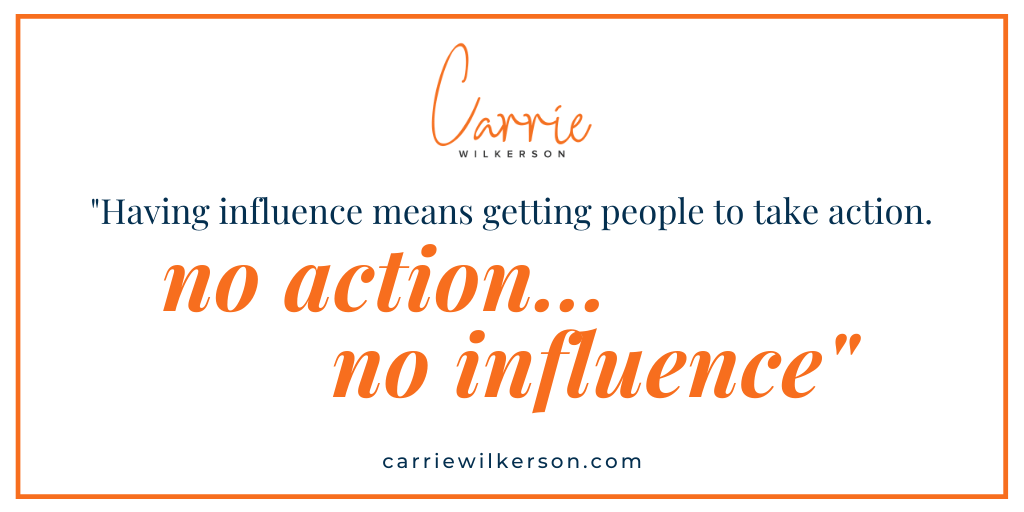 1. You have something to SAY

If you have something to say, you need influence to be heard.

We all have something to say. Whether you’re an entrepreneur, a service provider or the CEO of a seven-figure corporation, you’ve got something to say and you need people to hear it.

Without influence, there’s nobody around to listen to your message. It’s like standing alone in an empty room and having no one nearby to hear what you’ve got to say.

Building influence allows you to proclaim your message to the right people. People who care about what you have to say and want to stick around to hear more from you.

If you’re an influential leader, it becomes a lot easier to spread your message to others.

2. You have something to SOLVE

Another reason why you need to have influence is that you have something to solve. People have a problem and you’ve got a solution. However, you won’t be able to help those people solve their problem if you don’t have enough influence to spread the word about your solution and enough influence to persuade people to buy it from you.

So, how can you build enough influence to show people that you really do have the solution to their problem?

Ask yourself, what are you solving?

If you’re in business, you’re solving something.

If you’re not building influence to help more people solve the problem that you have the solution for, you’re being selfish. You’re too busy worrying about what people are going to think about you but you’ve got to push your ego to the side and focus.

You should have a burning desire to help people solve something. It doesn’t have to be the solution to an earth-shattering problem. It can be as small as helping someone lose weight or as big as helping someone turn their life around. Whatever problem you solve, you need to have enough influence to drive people to trust your solution enough to purchase or try it for themselves.

3. You have something to SELL

As Zig Ziglar once said, “Nothing happens until you sell somebody something.”

Selling funds our economy and our lives. And, you don’t necessarily have to be in business to sell something. You could be selling something without even realizing it.

We are all in the business of sales, whether we realize it or not.

If you have a product or service you’re selling, you need influence to sell it. As I’ve mentioned repeatedly in this post, having influence is about having the ability to move people to action. In this case, it’s about driving people to buy something from you.

Do you have influence?

Whether you having to say, solve or sell, you need to have influence. That doesn’t mean you need millions of followers on social media or you have to make it on The New York Times bestseller list. It simply means that you need to be able to lead people from one decision to another.

You can watch the video related to this podcast episode and blog post below: